Southern tradition dictates that if one wants to experience good fortune and have a prosperous year, one must eat a hearty helping of black-eyed peas on New Year’s Day.  These peas are never better than in a dish known as Hoppin’ John.  I am a true believer when it comes to this tradition, not because of my Southern roots, but because of my love of tasty dishes.  And this, my friends, is a very tasty tradition.

There are many ideas about where this recipe’s name originated from, though it is undecided whether the “hoppin'” came from those excited to eat the dish or a nickname for the dish’s original vendor, (who may or may not have been physically handicapped).  Most food historians will agree, however, that this American dish has African/French/Carribean roots.  In its essence, it is a spicy dish of black eyed peas (representing coins) simmered with pork and rice, typically served with collard greens (money) and cornbread (gold):  “eat poor that day, eat rich the rest of the year.” 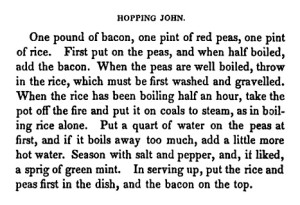 Mmm mmm, good.  Mint garnish?  Interesting…and while there is no shortage of variations of the original, my favorite Hoppin’ John recipe is from Cooking Light Magazine, and calls for smoked ham hocks, fragrant jasmine or basmati rice, and crushed red pepper for heat.  Purists may say there’s not enough pork, but I truly love the taste and simplicity of the recipe.  As for next year, though, I will be trying Elise’s recipe (pictured above) from Simply Recipes.  Her recipe seems to be closer to the original, and – let’s be honest – you can never go wrong with a recipe that calls for bacon…

By the way, when you eat the leftovers on the 2nd of January, then it’s called “Skippin’ Jenny.”  You Southerners with your sayin’s…go figure.  In any case, best of luck and prosperity to all y’all for a great 2013!

**IMPORTANT UPDATE!!!**  For the record, I never win anything.  Anything.  But just TODAY, I received word that I won two movie tickets to a local art theater.  Coincidence??  I think not.  The peas work, people.  I will be spending the rest of the day entering The Publishers Clearing House Sweepstakes and buying lottery tickets.  Good day.

This wedding theme is all about casual.  About getting to basics and what a wedding is all about – the people and the love.  It celebrates will all the enthusiasm and none of the drama.  It says, “what you see is what you get.”  Oh, and you like what you see.  You love what you see…

Because it’s fun, wild, and flirty.  A touch of tradition with a generous helping of vintage sass.  You’ll probably see some tattoos and hot pink hair.  You can bet everyone will be on the dance floor tonight…

So make it big – DIY features help keep costs down, so you can invite everybody but still keep an intimate feel.  Think of renting a big hall or warehouse space.  But most of all, have fun.  After all, it’s your special day. 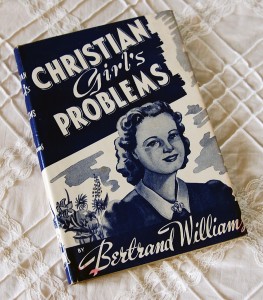 Needless to say, when I saw the copy of Christian Girl’s Problems: Manners and Morals for Christian Girls (Bertrand Williams, 1946) at the rental house we were staying at in Colorado with friends, I walked around reciting bits aloud to anyone who would listen, pausing only to pass it off to someone else to do the same.  I will warn you, that this discussion does take a candid look at some highly sexual notions from the late 1940’s.  I will use direct quotes that may offend sensitive readers.  Then there’s the rest of us…

Firstly though, let me say that I take no issue with the Christian religion.  People are entitled to their beliefs and I have the utmost respect for anyone’s choice.  What I do like to explore in this book are the outdated notions of proper behavior for a young lady, the downright improper comparison of a girl’s physicality in relation to success in love and life, and the dramatic ways in which the author chooses to describe situations of moral ambiguity.  In short, it’s a hoot…

Here are some quotables:

You should know that each chapter includes scenarios of the good handling of situations like the ones mentioned above, juxtaposed against scenarios of poor decisions.  It is amusing to say the least.  I have not yet decided whether to sell my copy yet or not…thoughts?

Do you like Retro fonts?  For free?  Me, too!  Who doesn’t, am I right?  So here’s just a handful of fun fonts circa the 1920’s through the 1960’s, from the classroom to the boardroom.  Use them in your newsletters, blogs, invitations, posters, etc. (always check the licensing fine print regarding commercial use, if necessary)!  Enjoy and remember, Google search ‘free vintage fonts’ and you’ll be busy for days… 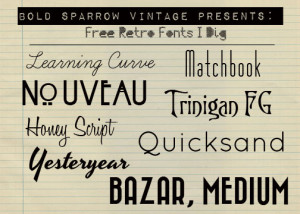 Who knew what could have happened on that fateful Friday afternoon exactly one week ago today.  It was just after noon.  I saw the “Yard Sale” sign and glanced down the street (occupational hazard – don’t follow thrifters).  It was close, and still going on.  I didn’t need or want to stop.

I flipped around and pulled to a stop in front of the house.  Nothing much to see – clothes, used appliances, and an old wingback chair in desperate need of reupholstery.  Upon closer examination, I found the chair to be surprisingly sturdy.  The interior foam still firm.  At that point, the homeowner approached me, “This would be a great chair reupholstered.”  I nodded slowly.  I have never reupholstered before in my life.  I can barely sew.  But I suddenly had visions of this chair, newly draped in a luscious Joel Dewberry pattern.  In my fantasy, I have a cup of tea in hand and I’m patting the chair, saying, “This old thing?  Just a little weekend project.”  Sip tea and wink.  Awesome.  “I’ll give you a good price for it – $5.00.”  I can’t remember my response, because I think at that point the heavens opened up and a ray of sunlight shone down on my new prize (cue choir of angels).  Her grandson helped me load it into the car, and I was off.

Truth be told, this all started with a recent trip to the county library.  Wandering the aisles, I came across “Care and Repair of Everyday Treasures: A Step-by-Step Guide to Cleaning and Restoring Your Antiques and Collectibles” by Judith Miller.  A wonder of an all-inclusive manual, it includes repair and restoration techniques for everything from textiles and leather to ceramics, jewelry, and stoneware.  The best part is that the book feeds my OCD by laying out the tools and supplies needed for each task Richard Scarry-style – with a labeled photograph of all the items.  Mmm-wah!  Anyway, there was a section of upholstery, reminding me that I’ve always been fascinated by the idea of it.  Layer upon layer, tedious tasks – did I mention my OCD?

So I took the chair home.  And I researched.  And I researched.  The first thing I learned is that removing the original upholstery is called “ripping off” (duh.) and can take upwards of 15 hours carefully removing old layers and tens of thousands of staples…carefully.  You should should label each piece you remove and use it as a pattern for your new fabric.  I couldn’t restrain myself anymore – I was out in the garage removing staples before you could say, “But it’s 107 degrees out in southern Arizona this time of year.”  And in the next hour or so, I realized I would develop a relationship with this piece of furniture.  Full disclosure – it stinks.  Bad.  My poor two-year old fanned her face all the way home from the yard sale, “Iss tinky, mama.”  I believe there was also a small, old dog who enjoyed the chair, as evident in a snot-like mess smeared into the base webbing under the chair.  But I still love it.  I do.  It’s like another child of mind.  Kinda, not really.  Okay, it’s like a butterfly cocoon just waiting to burst forth with beautiful life.  Whatever.  I named it Harvey and now it’s at an air-conditioned warehouse where I can work without worrying about heatstroke.  I named it Harvey, because it’s like that gross old guy who stinks and goes to the Super China Buffet with one eye missing but doesn’t bother to wear an eye patch so you have to not look at his gaping, black eye socket all through lunch.  So you can’t eat your lunch anyway.  Anyway, Harvey makes no concessions or apologies.  “Don’t look – eat your damn food and go about your damn day,” he says.  He’s cantankerous.  But what he doesn’t mention is that for years and years, he provided a place of comfort and solace for a very small woman (told by the firmness of the foam) without so much as a murmur of complaint. 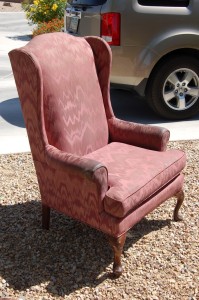 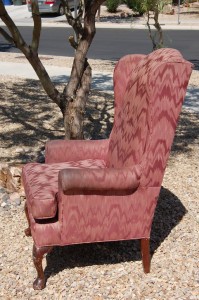 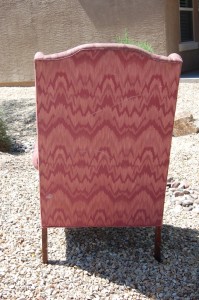